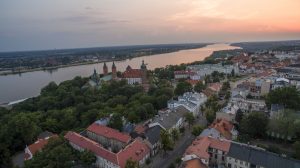 Located in the centre of Poland, about 100 km west of Warsaw, the city of Płock has a population of nearly 130,000 inhabitants. Płock became important in terms of state administration and culture as early as the Middle Ages. It was in this city that two Polish rulers had their seats at the turn of the 10th century; Płock was the capital at that time. Founded on a picturesque escarpment almost two centuries earlier, the city has been attracting visitors with magnificent vistas of the broad River Vistula, which flows through the vast Mazovian flatlands, ever since.

Full of charm and tourist attractions, Płock boasts numerous monuments and sights, some of the essential stops being the Cathedral Basilica, former Benedictine abbey, remains of the Mazovian Princes’ Castle, Diocesan Museum, Mazovian Museum (housing the greatest Art Nouveau collection in Poland), Divine Mercy Shrine and Stanisław Małachowski Grammar School, which is the oldest school in Poland. What one will also find worth visiting in Płock is the zoo, which is home to over 3,500 animals. In summer months, a number of musical events are organised in this city, including electronic music and reggae music festivals.

The city of Płock is an economic centre, too. It is oriented to modern technologies and successful business enterprises, with the petrol and power industries as well as the chemical, machine, clothing, food and building industries dominating over the others. PKN Orlen, the Polish oil giant on the European petrochemical market, has its seat in Płock as well.

More about the city: www.plock.eu/en/about_the_town.html